In Part 1 and Part 2 of this series we talked about production of total dissolved gas (TDG) at high head dams, and the use of air supply systems to mitigate cavitation damage to spillways and spillway modifications. In this part, we’ll discuss the structural designs used to reduce TDG during flow release from spillways.

Super-cavitating roughness elements, or baffle blocks for short, are designed to break up flow as water travels down a spillway. Depending on the placement of the blocks on the spillway surface, they can also help spread out the jet of water laterally as it exits the spillway, resulting in a larger impact area on the tailrace. Why does this help reduce TDG production? As we discussed in Part 1, dissolved gas supersaturation in the tailrace is a function of how long it takes the bubbles from the aerated flow to reach the water surface. By spreading out the impact zone of the spillway jet, and decreasing the amount of energy the jet has, plunge depth of the jet is reduced and the aerated flow can rise to the surface more quickly, which in turn reduces TDG.

The roughness elements generally consist of a flat face plate oriented perpendicular to the flow path, which allows for maximum energy transfer from the flow to the block. The body of the roughness element behind the face plate is made of concrete, stainless steel, or a combination of both, and generally tapers away from the face plate to reduce the potential for cavitation damage to the block itself. Photo 1, below, shows a side view of a roughness element before installation, where it will be partially socketed into a new concrete spillway surface. The face of the block where flow will impact is on the right. 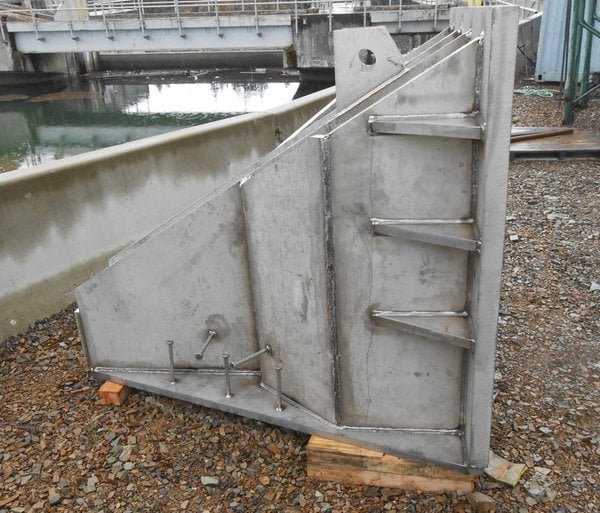 The flat face plate of the baffle block causes clean flow separation as water travels over and around the block, forming a “cavitation cloud” which envelops the roughness element and prevents damage from flow. In Part 2 we discussed the use of air ramps to ensure that flow is fully aerated as it passes by the roughness elements, further preventing cavitation damage and the formation of horseshoe vortices around the block bases.

The roughness elements are anchored to the spillway surface or underlying rock abutment using post-tension anchors, and are socketed into the spillway to increase bearing capacity. Impact loads from debris or logs traveling down the spillway generally govern the design loads for anchors. Shear keys with additional shear reinforcement can be used if the blocks are designed to be placed very near the spillway lip, where there is not adequate concrete thickness for the required bearing strength.

Depending on the type of dam and spillway arrangement, post-installation stability analyses may be necessary to ensure that Federal Energy Regulatory Commission (FERC) stability criteria are met. Spillway capacity calculations are also performed to ensure that the spillways are adequate to pass Probable Maximum Flood (PMF) flowrates after modifications. Alden has teamed with several public utilities to model, design, and test super-cavitating roughness elements at their high head dams, and has successfully implemented TDG-reducing measures while meeting all FERC criteria for stability and spillway capacity.