Understanding The Affects of Wake Zones and Building Exhaust

Modeling environmental conditions is often a part of the model studies we perform, particularly where air and gas flow can be affected by variables such as wind speed and direction. That experience is what led us to look into a reported issue with a newly built school. Instincts kicked in and we quickly zeroed in on a problem and developed an inexpensive solution using a computational fluid dynamics (CFD) model.

A newly constructed school building was experiencing incidents of poor indoor air quality, specifically heating exhaust being drawn into the school's ventilation system. These events happened more frequently on cool, windy days, and required the evacuation of students and staff.  A visual inspection revealed that the school's heating exhaust was being drawn into the building through the air handling units (AHU). See Figure 1. 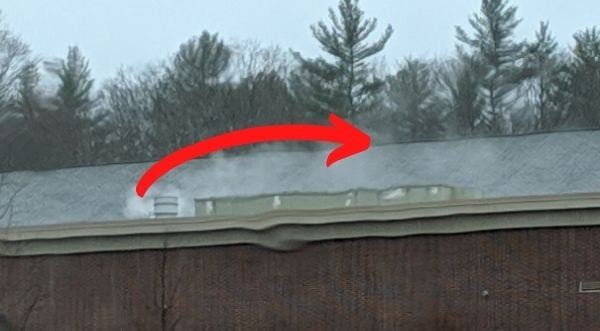 The ASHRAE handbook provides various insights to the basics for exhaust stack system to prevent various phenomena from occurring—including exhaust plum ingestion, the apparent problem with the school. A large recirculation zone is created on the lee side of the building which allows for possible entrainment of exhaust gases (Figure 2). In order to guard against this ingestion, an ideal stack height should be in “Wake Zone Height C” where the stack exhaust exit rises above the wake zone. 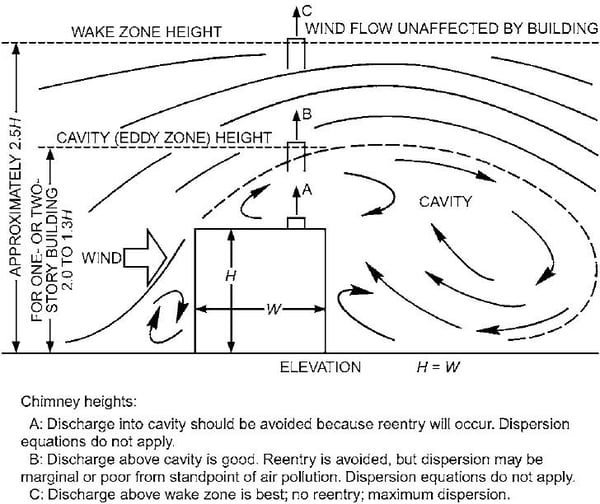 The wake zone in any design is highly dependent on wind direction. In this case, based on Wind Rose data for the school's geographic locatiom, a NNE wind over the flat roof is common, especially in cooler months. Therefore, the NNE wind was the focus of our exhaust plume investigation.

The school building roof line has various roof heights and geometry that could affect the wake zone. The source of the ingestion, however, appeared to be taking place on the equipment roof—a flat roof top on the end of the building. In order to confirm what the visual inspections revealed, we started with a baseline CFD model of the existing exhaust configuration using a NNE wind direction.

The following animation provides a visualization of the wind passing over the school building, focused on the equipment roof top where the exhaust stack and AHUs are located. The video provides a visual reference to the CFD model outline and general flow characteristics. 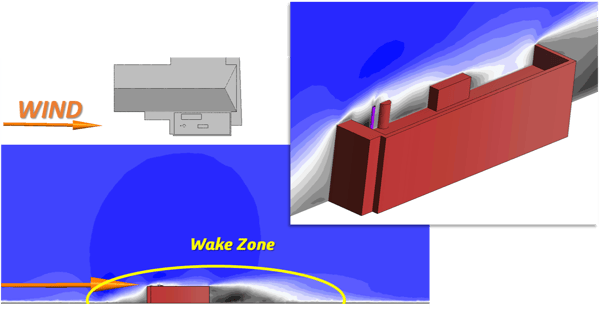 Further examination of the simulation revealed the exhaust jet is rapidly dissipated as it exits the stack at the equipment roof. Figure 4 shows in red the temperature profile of the heated plume. The black streamlines indicate how the exhaust plume is drawn into the air handling unit, highlighted in green. An animation of the exhaust plume ingestion provides even further explanation as to what was causing the poor indoor air quality in the school. Using ASHRAE specifications, we calculated that the stack height should be at least 10 ft taller. We ran another CFD model to evaluate that modification and then compared it to the baseline model.

Figure 5 is the same figure as Figure 4, only this model run was conducted with the 10 ft extension of the stack. The building wake zone is unchanged. The new stack height, however, is high enough to keep the boiler exhaust gases from reaching the AHU intake, as shown by the streamlines in the figure,

The animation provides another angle in which to view the effects of the design change. 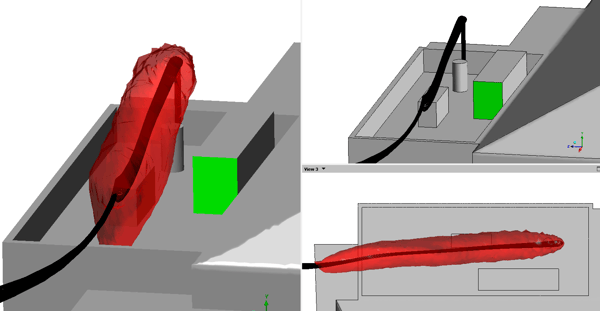 The CFD model showed that by increasing the stack even by as little as 10 ft would allow the exhaust plume to escape the equipment roof,  preventing ingestion of the boiler exhaust gases into the AHU. By using our ASHRAE expertise, we were able to quickly calculate a potential solution and use CFD modeling to evaluate the impact of these changes.

Duncan helps clients engineer and optimize power/industrial designs, defense components and ventilation systems. In addition to being a key part of Alden’s Gas Flow Systems group, Duncan is a member of three ASHRAE Technical Committees, including TC 4.10, TC 5.9, and TC 9.2, where he currently serves as the Vice Chair.