Searching for eels is an activity reserved for those who like to stay up late. Only under the cover of darkness is one able to have the best chance to find these nocturnal fish. Surveying for American eels, Anguilla , with lanterns at night or “shining” is a common method to document their presence in rivers across eastern North America. Juvenile American eels often congregate downstream of obstacles that block their upstream movement (eels are catadromous fish, meaning adults spawn in saltwater and the young move into freshwater to rear and mature before returning to the marine environment to complete the reproductive cycle). Hydroelectric dams are common impediments to upstream migrants along river courses. Finding optimal areas to establish passage routes for eels to move upstream is a primary reason to shine for eels.

Eels, being a fish, become more active as the water temperature rises. When the temperature is above 10 degrees C, which generally occurs from May to October in New England, eels of all ages and sizes become more active. The recently born glass eels, (so called because of their transparent appearance), are carried northward by Atlantic Ocean currents, floating along like crystalline feathers until tides pull them ashore where they begin a process of metamorphosis into the more recognizable elongated fish. These eels, now called elvers, grow and mature to the point where they are capable of swimming against the river current to seek inland freshwater and a chance to grow to appreciable sizes, (mature female eels in the St. Lawrence River can reach 1 meter in length and weigh up to 8 kilograms). Eels are long-lived fishes, some individuals are almost 30 years old before returning to the central Atlantic Ocean to complete their life cycle and give life to the next generation.

Surrounded by complete darkness after nightfall during the warm spring or summer months, throw on a pair of waders, and the search for the secretive eel begins. A careful inspection of the area of interest such as a dam tailwater using flashlights or lanterns is best achieved from the shore or among the rocks and boulders of the riverbed. If the river is inaccessible for wading, a pair of binoculars can help view from a distance by aiming a strong spotlight at the suspected congregation area. Eels do not need a lot of flowing water to stimulate them to try and ascend. They can seek to move upstream through even the smallest trickle of water if that is all that is available, so be sure to pay attention in areas where these conditions exist. Look for rivulets of water flowing among boulder fields that offer a constant and uninterrupted path. They may try and lift themselves up with their tails through a plunging waterfall but they need substrate to support their long muscular bodies and push against it to get up, over and through the point of passage they seek. Eels even have the extraordinary ability to travel overland if the desire is strong enough to move past an obstruction. During warm humid nights, eels can be observed doing just this. 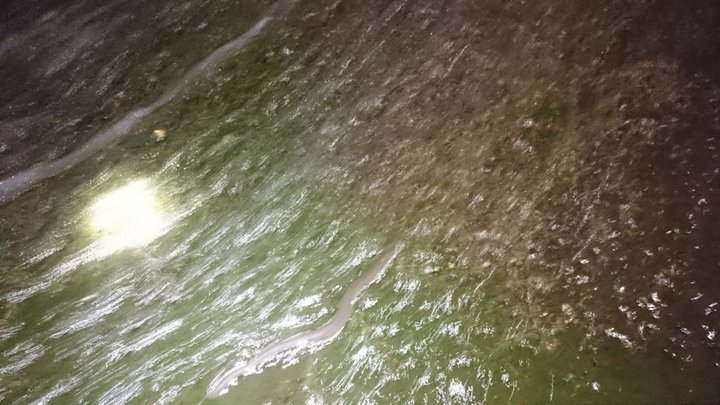 Just because its night-time and it’s the month of June doesn’t mean that eels will be on the move.  Environmental conditions such as air and water temperature, precipitation, percent cloud cover, and lunar phase influence eel behavior.  Variability in these conditions during the spring and summer months can cause eel activity levels to increase or decrease.  Keeping track over a season the exact locations and environmental conditions that cause the greatest number of eels to congregate will provide the best information to decide where to establish an upstream passage route.  There are many ways to provide upstream passage for eels (ladders and traps are common), but it is critical to know the optimal location to place these facilities.  Eel shining is a proven way to establish these locations by observing the conditions that eels prefer at a site of interest.  Alden advocates using night-time surveys as a low-tech yet effective method to shine the light on upstream eel behavior.