For many employees at Alden, fluid dynamics is part of their life outside the office--in the sports they choose for their free time.  In many cases, a sport was what came first and later helped inform a career choice in fluids and fluid flow.  This ongoing series features some of the various and unique ways our employees spend some of their non-working hours and how CFD and fluid flow analysis is being used to improve techniques used in those sports.

Duncan Phyfe, a senior CFD engineer at Alden, started enjoying archery thanks to his mother.  She was one of the riflery coaches at Choate-Rosemary Hall prep school.  When the school needed an archery instructor, they assumed she could do it, since she already knew how to get one type of projectile to hit a target!  So Duncan has been shooting arrows since he was about 6 years old.

When Duncan was 10 years old, he started attending The World Archery Center (TWAC), and that is when he started to learn the physics and aerodynamics of archery.  The mentor for the instructors at TWAC was Dr. Clarence Hickman, an archery buff, and physicist who worked on rockets with Robert Goddard.

Dr. Hickman developed an explanation for “the archer’s paradox,” by which an arrow must apparently move around the bow but still moves towards the target.  An episode of “Smarter Every Day” explains this paradox with some nice high speed video:

It was through learning about the aerodynamics and mechanics of archery that Duncan realized he wanted to be a fluids engineer.  He continues to shoot (both guns and bows) to this day, and also teaches archery in the local middle school. 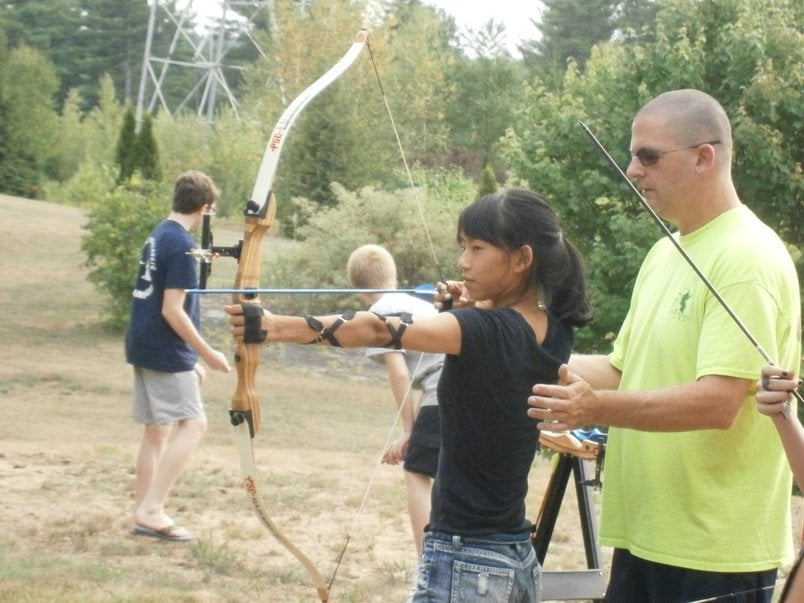 Duncan Phyfe teaching archery (above), and as a young archer (below, left).

Remember to send us links of your own fluid dynamics hobbies!

Amie Humphrey Facendola is an engineer and the Quality Assurance Program Manager for Alden. She holds a professional engineering license in the Commomwealth of Massachusetts, maintains a lead auditor certification and played a significant role in the development of Alden's 10CFR50 Appendix B nuclear quality assurance program. Amie also volunteers for the Massachusetts Envirothon in promoting environmental education among high school students. Amie has been with Alden almost 10 years and previously worked for AECOM. She has a B.S. in Civil Engineering from Lehigh University.