You might never know when one seemingly minor decision could change your life.

One summer weekend, just before entering my third year in the Civil & Environmental Engineering program at Tufts, I found myself on a whitewater kayaking class for beginners run by volunteer instructors with the Appalachian Mountain Club. A friend recruited me to join at the last minute; they needed more new “boaters” to reach their minimum capacity.

Some combination of perfect weather, good company, and new challenges that weekend got me hooked on the sport. The more time I spent on the river, the more folks I met who had degrees and careers related to hydrology or engineering. That would eventually include me, too – my love for this hobby & fluid dynamics led me to work here at Alden.

When I returned to school in the fall, I took my first fluid dynamics course. The coursework and the new hobby complemented each other – spending time in a boat made it easier for me to understand certain fluid mechanics topics.

One of those topics is the concept of a stagnation point: an obstruction in a flow field, like a rock or bridge abutment in a river, will cause the fluid to slow down to a velocity of zero at the object’s surface, resulting in high static pressure.

For a boater, the stagnation point is a dangerous place to be. You and your boat can get pinned on the upstream side of an obstruction, and if you can’t get free quickly, you could be injured or drown.

What makes the stagnation point so dangerous? Consider conservation of energy and the Bernoulli equation, a key concept in fluid dynamics:

The Bernoulli equation only applies to steady, incompressible, frictionless flow along a streamline. Under these conditions, total mechanical energy per unit mass of water (which is the sum of pressure (p/rho), kinetic (V2/2), and potential (gz) energies) is constant along a streamline. This concept can clearly explain why a kayaker doesn’t want to get stuck at the stagnation point. 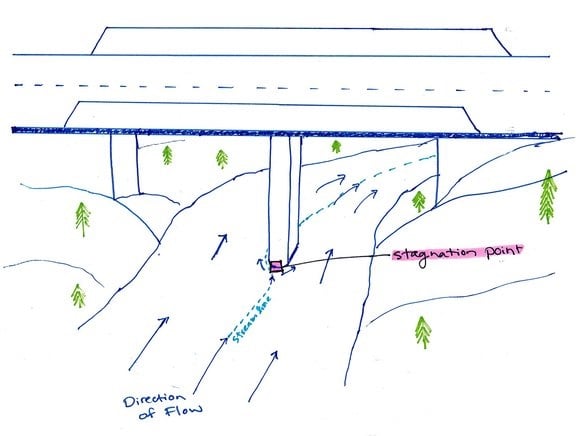 Follow the light blue dotted streamline through the middle of the river in Figure 1. If we estimate negligible friction and minimal change in elevation as the streamline approaches the bridge abutment, Bernoulli’s equation says the energy from a high velocity in the river upstream of the abutment will change to a velocity of zero, along with high static pressure at the stagnation point.

For a boater, this means that if you float head on into an obstruction and become pinned, you will have a velocity of zero, and high water pressure will hold you in place against the obstruction. Yikes! It is best to avoid this situation by navigating around the obstruction, but boaters should always be prepared for the worst by staying up to date on swift water rescue techniques and carrying appropriate safety equipment. Thanks for the safety tip, Bernoulli!

Whitewater kayaking was also helpful in understanding my favorite dimensionless parameter: the Froude number! This parameter compares inertial to gravitational forces. It is also a ratio of the fluid’s velocity to the speed that a surface wave travels across the fluid (AKA wave celerity).

Froude numbers less than 1 indicate subcritical flow: the water is deep and moving relatively slowly. Froude numbers higher than 1 indicate supercritical flow: the water is shallow and moving quickly. At a Froude number of 1, we have critical flow: gravitational and inertial forces are equivalent. Critical flow can be achieved where the slope of the channel or river is zero, such as over the top of a weir. If you measure the depth (L) of water over the top of the weir as well as the width of the river along the weir, you can determine the flow area, flow velocity (using the Froude number), and ultimately the total flow rate of the river. The Froude number also helps us understand how waves form, and why kayakers are able to surf on them.

When conditions are just right in a river, standing waves and holes (shown in Figure 2) can form; they stay in the same place and don’t move with the flow of the water. Kayakers can have fun with these features by surfing on them, balancing on top of the wave or hole, and staying in the same location relative to the river bank in a fast-moving river. 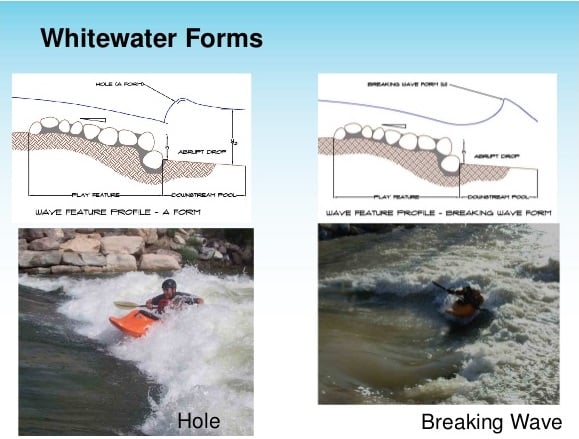 In fluid dynamics, this phenomenon is called a hydraulic jump.

Hydraulic jumps suitable for surfing sometimes occur naturally in rivers, and can also be designed and installed where river flow and gradient (along with local stakeholders and regulatory agencies) permit. To create a hydraulic jump, a weir-like structure in a river (shown as a “play feature” in Figure 2) can be used to make the flow to transition from critical to supercritical (i.e., the water is shallow and moving quickly). An abrupt drop leading into the downstream pool creates a discontinuity along the river bed. The flow immediately becomes subcritical, getting deeper and slowing down. This abrupt change is mirrored at the river surface, shown in these pictures as a “seam” in a hole or as a “trough” in a wave, where the green water of the supercritical upstream flow meets the hydraulic jump.

The velocity of the subcritical flow is very low, and can in some cases reverse so the water is flowing upstream, which makes it possible to surf and do tricks in a wave or hole without floating downstream.

The flow is critical at the seam or trough, which means that the Froude number is equal to 1.  The wave/hole will not move around too much since the flow velocity is equal to the wave celerity.

Kayak surfing (made possible by the Froude number) is my favorite thing to do!! Check it out:

McLaughlin is one of a small number of companies that create whitewater parks for surfing, and Alden has been lucky enough to collaborate with McLaughlin on occasion.