During spill season at hydroelectric dams, more water flows into the upstream reservoir than can be used to generate electricity in the powerhouses. This excess flow must pass through a number of different flow release structures in order to bypass the dam and powerhouse. Spillways, diversion tunnels, and low-level sluice gates are commonly used to route flow past dams. Open channel spillways are one of the most common flow release structures at high head dams, and create a highly aerated, turbulent jet of water that exits the spillway up to 150 feet above the river downstream of the dam. This waterfall of aerated flow can plunge to the bottom of the tailwater pool, where the bubbles of atmospheric gases are slowly dissolved into solution with the water. The deeper the jet plunges, the more pressure is exerted by the water on the bubbles, dissolving them faster and preventing them from rising to the surface. This is why we see a frothy white plume of flow that can stretch up to half a mile downstream of a dam when flow is being released, as shown in the photo of Boundary Dam spillway below. 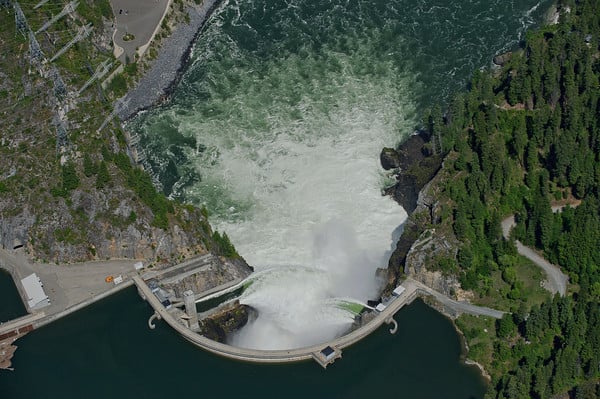 Once the water has dissolved all the gases it can hold in equilibrium (saturation level), the river can exceed its saturation level and becomes supersaturated with dissolved gasses. This is a function of the pressure exerted on the gas bubbles at depth, and the travel time of the bubbles to reach the surface. The sum of all the gasses dissolved into solution is called the Total Dissolved Gas (TDG) concentration. High TDG is a hazard for aquatic life, especially migratory fish such as salmon and steelhead. When fish come into contact with high TDG concentrations at depth, their tissues absorb the gases. When they later swim to the surface, the gasses come out of solution and form bubbles, which can cause trauma around the gills and fins. This trauma is known as Gas Bubble Trauma and has become a major problem for fish populations that must use fish passage systems to bypass dams. Some good photos showing Gas Bubble Trauma in fish can be found in this linked article in the Billings Gazette:

The Environmental Protection Agency (EPA) has introduced regulations that limit TDG production to 110% of saturation. This limit is enforced regardless of the TDG level of the water coming into the reservoir, which may be at or near saturation due to upstream dams, waterfalls, or other conditions. High head dams and hydroelectric projects are required to be relicensed with the Federal Energy Regulatory Commission (FERC), and must prove that they meet the new EPA regulations before being granted a license. The owners of a number of affected projects have reached out to Alden to help them find cost-effective solutions to TDG problems, which we have explored extensively using computational fluid dynamics and physical modeling, as well as structural and operational changes to the projects.

Read part 2 of this series to explore the use of energy-dissipating devices and reducing the potential for cavitation on the roughness elements.