It's a bird's-eye view on a problem that often goes undetected by the naked eye. But thanks to a growing desire to reduce negative impacts to our communities and the environment—and an influx of funding— Orphaned Well Programs are seeing renewed success, thanks in part to the use of drones.

Throughout the United States, orphaned oil and gas wells litter the country's landscape. The U.S. Environmental Protection Agency estimates that there are more than 3 million total abandoned oil and gas wells. Many of these wells are documented and have been decommissioned and closed up properly. Still, and particularly in states that experienced the oil and gas boom of the late 1800's and early 1900's, these abandoned wells remain improperly plugged and with no solvent owner of record to pay for their remediation.

Federal and state programs have been developed to find, document, and ultimately plug improperly abandoned oil and natural gas wells. However, creating effective plans to plug orphan wells requires one thing: they need to be located. 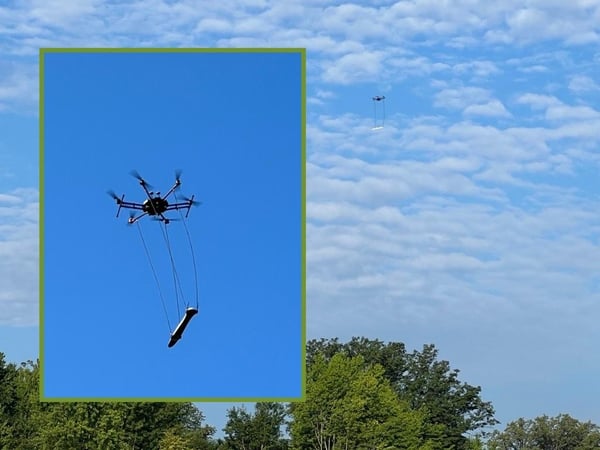 A Magnetometer is attached to a drone and is flown in a pre-defined pattern over an area of concern to detect anomalies at the earth's surface.

This system uses a magnetometer, a sensor that can detect metallic objects—like well casings hidden just below the earth's surface. When attached to a drone and flown in a pre-defined pattern over an area of concern, the returned data can be used to identify anomalies.

Professional surveyors then combine the aerial magnetic survey data with Geographical Information Systems (GIS) mapping information to conduct ground investigations to efficiently pinpoint the source of the anomaly and confirm if an orphan well exists. From there, remediation plans can be developed.

But who pays for it?

Abandoned well programs have been established for years to help pay for plugging and remediating orphaned oil and gas wells, and now they are set to see an influx of funding opportunities. The Bipartisan Infrastructure Law will invest up to $4.7 billion in the form of grants to help federal and state programs tackle this decades old problem, including an Orphan Well Program established by the State of Ohio in 1977.

Ohio's already robust program is set to receive an unprecedented boost in funding. According to Ohio Department of Natural Resources (ODNR), Ohio could see

The state has also expanded its use of drone technology, seeking experienced professional surveyors who can capitalize on state-of-the-art aerial magnetic surveys, seeing it as a safer, faster way to collect higher fidelity data to verify, identify, and locate additional orphan wells throughout the state. Watch this video from ODNR to learn more about Ohio's Orphan Well Survey Program.

A team from Verdantas, including an FAA certified commercial sUAS pilot, successfully bid on and won a contract to conduct an aerial magnetic survey on behalf of ODNR. The team investigated approximately 2,000 acres over the course of 15 days. Verdantas developed the flight plans to maximize the potential anomaly detection while maintaining a safe flying conditions.

Verdantas is processing the data from each survey to create 2D anomaly maps. All anomalies that are potential buried ferro-metallic objects and not caused by observed surficial objects or debris will
be evaluated. 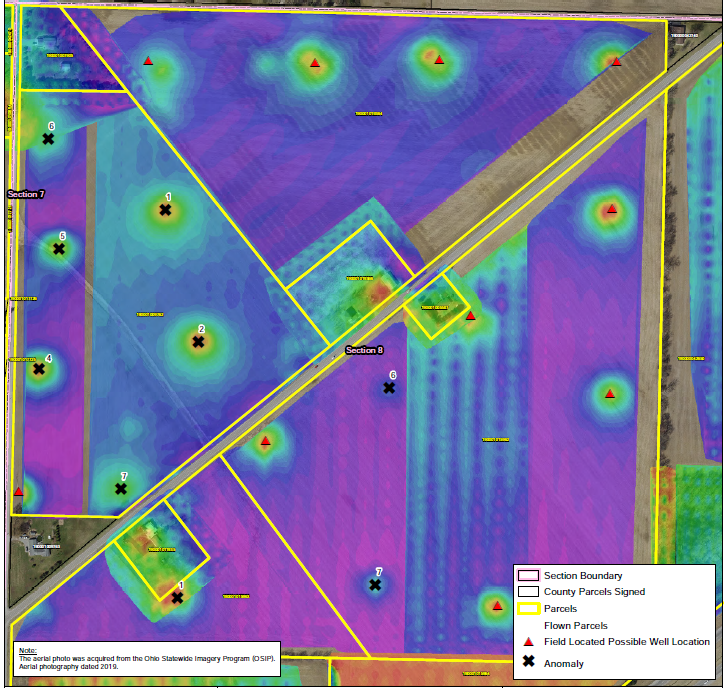 Anomalies, marked by a black X, dot a field in which other possible wells are located, designated by red triangles.

The results developed from these drone services, GIS, and data visualization techniques allow for a faster, more informed approach to investigating, documenting, planning and remediation of orphan wells throughout the state.

Members of the public are encouraged to report orphan wells to the appropriate governing body in their state or region. In Ohio, ODNR is the sole regulatory agency and orphan well investigations must start with through them. Visit the ODNR Orphan Well Program website for more information.